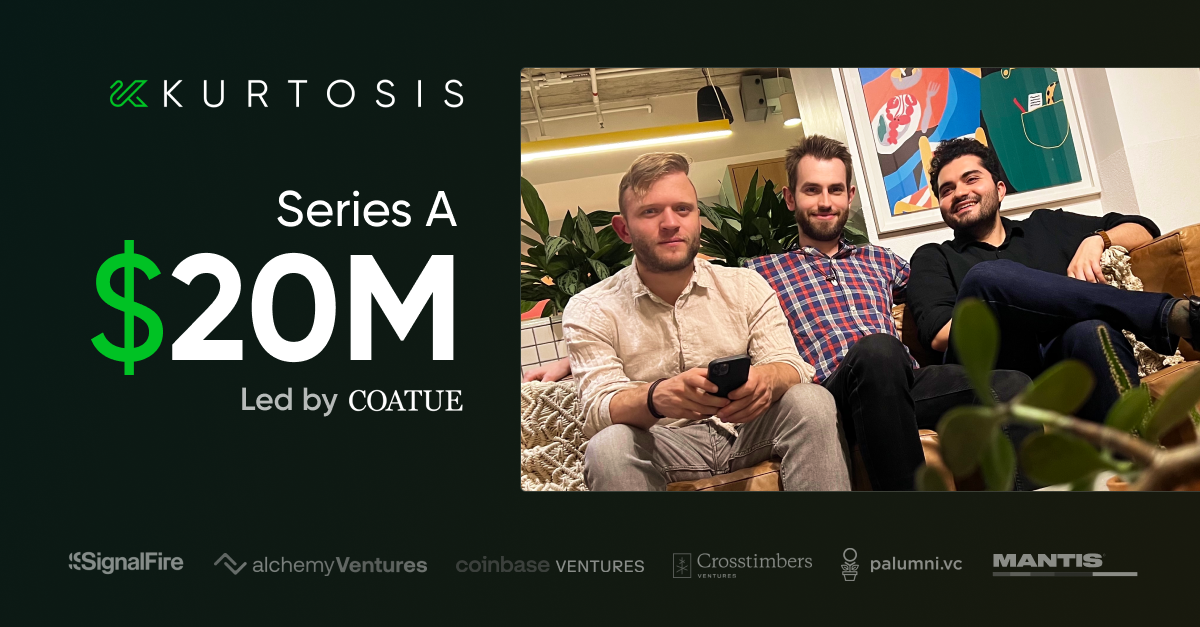 We are thrilled to announce that we have raised $20M in Series A funding, led by Coatue and with participation from Coinbase Ventures, Crosstimbers Ventures, the Chainsmokers' Mantis VC, and angel investor Olivier Pomel, CEO and founder of Datadog, among others.

Kurtosis was founded in 2020 by former Palantir engineering leads Galen Marchetti and Kevin Today, who sought to make developing and testing distributed systems as easy as building single-server systems. They first deployed Kurtosis in the web3 space, where blockchain developers are building some of the highest-stake, largest-scale distributed systems in production today.

“Distributed systems are hard to develop today, and a lot of the problems come from managing the many different types of environments that teams need across the development cycle,” explains Galen Marchetti, CEO and co-founder. “As engineers, we spend a lot of time on repetitive work configuring and manipulating environments for development and testing. We wanted to build a tool that lets developers focus on technical innovation instead. This is our mission at Kurtosis - to build a tool that enables engineers to build distributed systems with the same ease as building single-server applications”.

We aim to make it easier for developers to run advanced end-to-end testing and development workflows with a modular and portable environment architecture. Our tool gives engineers the ability to write parameterized and flexible environment definitions and to manipulate those environments during execution. Users can write advanced end-to-end tests with dynamic networks and reliably reproduce environments locally for prototyping and debugging workflows. Our software is the next layer of abstraction in the history of containerization technology, providing a useful and pluggable virtualization layer at the level of entire environments.

We are already serving customers in the web3 space where the problems of environment management are particularly difficult. Ethereum core developers across all nine major client teams, as well as the Ethereum Foundation’s DevOps and testing teams, are using Kurtosis to build, test and debug software for The Merge - one of the hardest system upgrades in the history of software. During The Merge, thousands of independent Ethereum node operators will simultaneously upgrade their code to adopt a different consensus protocol and blockchain architecture without any downtime as over 100 billion dollars of capital flows through the network. Kurtosis has also been used at Ava Labs to do fault-tolerance testing on the Avalanche blockchain and in the NEAR ecosystem for dApp-level development and testing workflows.

Alongside the Series A funding, we are joined by former Cypress.io Director of Developer Experience, Amir Rustamzadeh, as founding Head of Product.

"I've seen first-hand how some of the largest enterprises build software," shares Rustamzadeh. "The most difficult and consistent pain point I've witnessed has been the setup of development and testing environments. This is one reason our vision for Kurtosis makes it absolutely essential for any organization trying to confidently ship non-trivial software at scale.”

We are a next-generation technology built on top of industry-standard giants like Kubernetes and Docker. Rustamzadeh adds that Kurtosis is “reimagining the primitives and workflows developers leverage at every stage of the software development lifecycle with a roadmap to broaden access to developer tools that were only accessible by the juggernauts of the tech industry.”

With the funding, we will build a highly technical product organization backed by strong engineers and developer advocates to invest in the long-term vision of ushering in the next generation of software development. We seek to expand our base in the web3 space while starting to work with clients and developers building microservice-based distributed systems.

“While we started with customers and use cases in the web3 space, our product is built to orchestrate and manipulate environments for any distributed system”, said Kevin Today, CTO and co-founder. “There’s so much potential in changing how teams interact with powerful, lower-level tooling like Kubernetes - we’re excited to show the industry what a different development experience can look like.”

Our Series A funding follows a $2.5 million seed round in August 2021. The Seed was led by Signalfire, with participation from Hustlefund, Alchemy Ventures, Figment, and Ilia Polosukhin, co-founder of the NEAR protocol, among others.

“Since leading Kurtosis’ seed investment, we’ve been impressed with their traction in the web3 space”, Oana Olteanu, a partner at Signalfire, said. “They’re solving a critical problem for developers building complex systems, and we’re excited to see Kurtosis evolve into a core solution for environment management infrastructure across the industry.”

We're in build mode at Kurtosis. Follow along for the latest.

Thank you! You're on the list.
We'll keep you posted and only send you useful things.
Oops! Something went wrong. Email us directly via hello@kurtosistech.com

NEAR on Kurtosis: Local Development and Testing Environments for Developers in the NEAR Ecosystem

One-button click to access your own local devnet, wallet, explorer, and indexer for prototyping and testing applications in the NEAR ecosystem.